Trump took aim at Ohio state Sen. Matt Dolan, who formally jumped into the race earlier in the day, because Dolan’s family, the owner of the Cleveland Indians, announced the name would change to Guardians after this baseball season concludes.

‘Anybody that changes the name of the once storied Cleveland Indians to the Cleveland Guardians should not be running for the United States Senate representing the Great People of Ohio,’ Trump said in a statement. 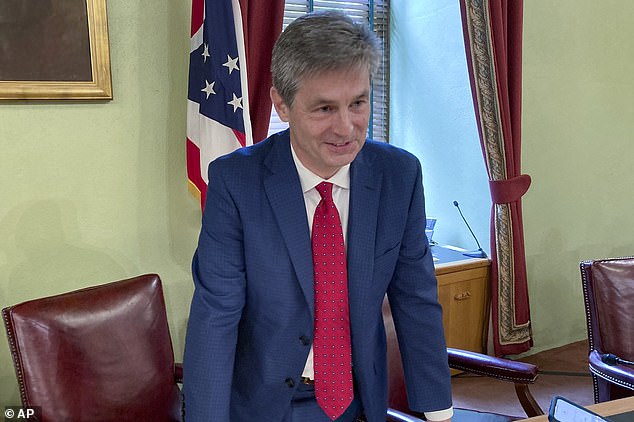 Ohio state Sen. Matt Dolan (pictured) announced Monday he would be jumping into the Republican primary to fill the seat being vacated by Republican Sen. Rob Portman. Trump put out a statement saying he did not support Doland

The Cleveland Indians will be called the Cleveland Guardians after this year’s baseball season wraps up. State Sen. Matt Dolan had publicly criticized the name change, but that didn’t help his case with the former president

In December, owner Paul Dolan – the candidate’s father – announced the team’s intention to change its name, after years of pressure from native American groups and after the country’s racial reckoning following the death of George Floyd the summer before.

Trump correctly pointed out that Matt Dolan has been publicly critical of his family’s decision to change the name.

The GOP hopeful called the rebranding an unfortunate consequence to the ‘culture wars.’

But that didn’t help Dolan’s case with the former president.

‘Despite this, a man named Matt Dolan, the son of the owner of the team, said he is against Cancel Culture,’ Trump said.  ‘Do those two things really work together?’

‘In any event, I know of at least one person in the race who I won’t be endorsing,’ the ex-president continued.

‘The Republican Party has too many RINOs!’ Trump added.

The other Republicans running in Ohio are closer to Trump’s political mold.

Throughout his political career, Trump has been vocal on culture war issues – including expressing support for maintaining Confederate monuments and keeping names that are viewed as racist on American sports teams.

Photos: Over 650,000 white flags commemorate pandemic's toll on the U.S.