Rupert Murdoch personally made the decision to allow Fox News to broadcast that it had called Arizona for Joe Biden in the 2020 election, a new book reveals.

Donald Trump and his aides were furious when Fox News became the first network on election night to call Arizona for Biden.  And the founder of News Corp. was behind the decision, revealed Michael Wolff in his forthcoming book ‘Landslide.’

On election night, Murdoch’s son Lachlan, the CEO of Fox Corporation, got a call from the network’s election-data operation shortly after 11 p.m. ET saying they were ready to declare Arizona for Biden.

The state was highly competitive during the contest and had not gone for a Democrat since Bill Clinton in 1996. Biden and Trump both campaigned hard for the state with Biden winning a coveted endorsement from Cindy McCain.

Wolff notes in his book, according to an excerpt published by Business Insider, that the Murdoch family had ‘every reason’ to delay calling Arizona, given Fox’s pro-Trump stance and the fact that no other network had made the call yet.

‘Lachlan got his father on the phone to ask if he wanted to make the early call. His father, with signature grunt, assented, adding, ‘F*** him,” Wolff wrote.

Fox News calling Arizona was a pivotal moment in the coverage of the election as the earlier results showed Trump had a chance he could retake the White House.

The Trump team is still refuting the election results in Arizona with an audit of ballots by a private company. 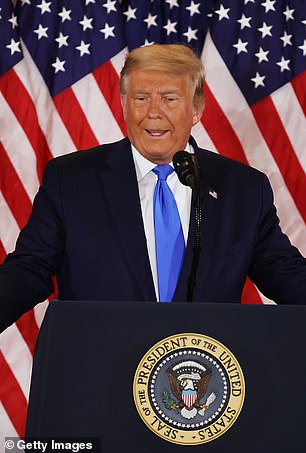 ‘This account is completely false. Arnon Mishkin who leads the FOX News Decision Desk made the Arizona call on election night and FOX News Media President Jay Wallace was then called in the control room. Any other version of the story is wildly inaccurate’, a spokesperson told DailyMail.com in a statement.

‘This never happened and is completely untrue,’ a spokesperson said. They also noted how Hemmer was taken by surprise when Arizona was called for Biden.

Trump, in a blanket statement released on Friday, slammed Wolff and other authors of upcoming books about his presidency, calling them ‘fiction.’ 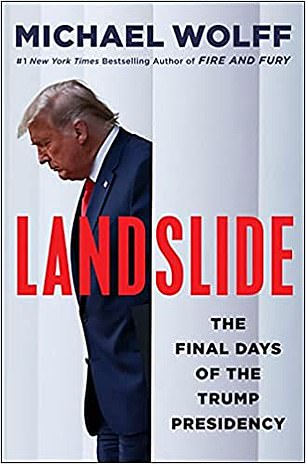 ‘It seems to me that meeting with authors of the ridiculous number of books being written about my very successful Administration, or me, is a total waste of time. They write whatever they want to write anyway without sources, fact-checking, or asking whether or not an event is true or false. Frankly, so many stories are made-up, or pure fiction,’ he said.

But Trump was enraged about Fox’s election night call and trashed the network on Twitter in the aftermath of the election.

The Associated Press followed soon in calling Arizona after but other news channels held off.

Despite pressure from Trump administration officials, Fox stood by its call. Biden won Arizona by about 10,000 votes and recounts reaffirmed his victory.

The network announced Biden’s win at 11:20 pm on election night.

Trump erupted in anger, telling others in the White House to ‘get that result changed,’ a senior administration official told The Washington Post at the time.

White House Chief of Staff Mark Meadows phoned Fox News’s decision desk while senior adviser Hope Hicks, who had returned to the White House after a spell working at Fox Corp., got in contact with Raj Shah, a former Trump White House staffer whom she hired at Fox, about getting the call reversed. 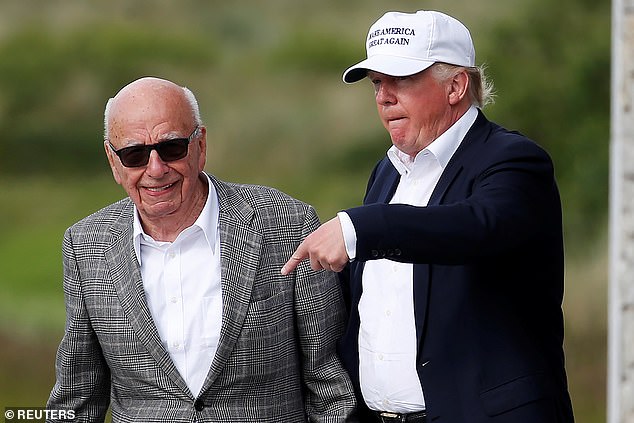 Rupert Murdoch and Donald Trump together in June 2016, when Trump was the presumptive Republican nominee for president

But the network stood firm. And Fox decision-desk chief Arnon Mishkin went on air to explain his call and stand by it.

The real danger was that Fox could have become the first news outlet to call the presidential race for Biden. With Arizona’s 11 electoral votes in his column, Biden just needed Nevada’s six electoral votes – a state where he was in a comfortable lead – to take the White House.

But no news organization called Nevada first. Instead Pennsylvania’s 20 electoral votes were awarded to Biden, giving him the presidency without the Democrat needing Arizona. 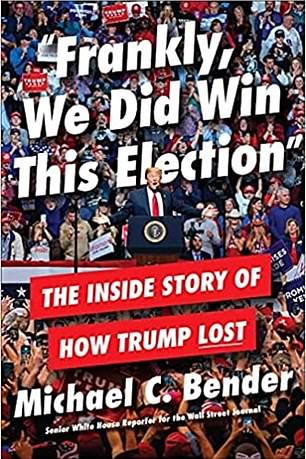 Former President Donald Trump reacted with fury to a string of unflattering books on Friday, saying many of their stories were false or made-up. Two books, by journalist Michael Bender and Michael Wolff, are due to be published next week

His intervention appeared to be triggered by an anecdote in a forthcoming book by journalist Michael Bender, describing how he threw a newspaper article at Vice President Mike Pence as they argued about personnel moves.

It is just one of a slew of new accounts lifting the lid on Trump’s turbulent time at the White House.

‘It seems to me that meeting with authors of the ridiculous number of books being written about my very successful administration, or me, is a total waste of time,’ said Trump in a statement sent by his political action committee.

‘They write whatever they want to write anyway without sources, fact-checking, or asking whether or not an event is true or false.’ 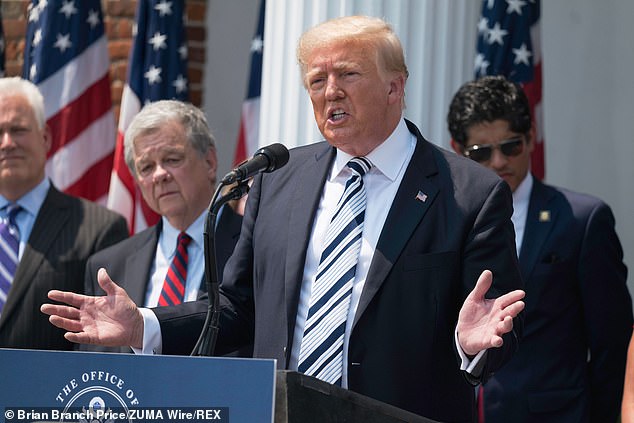 Trump dismissed books about his administration as containing stories that are ‘made up, or pure fiction.’ Two are due to be published next week promising more unflattering headlines

‘Frankly, so many stories are made up, or pure fiction.’

Bender’s book, ‘Frankly, We Did Win This Election: The Inside Story of How Trump Lost,’ will be published next week.

It reveals how Trump told his stunned Chief of Staff John Kelly that ‘Hitler did a lot of good things,’ according to The Guardian.

It also describes one of the rare disagreements between Trump and Pence, triggered by the president in 2018 learning that his vice president hired his former campaign aide Corey Lewandowski.

‘So disloyal,’ said Trump as he threw a crumpled newspaper article about the hiring at Pence.

Pence was reportedly furious, pointing a finger a few inches from Trump’s chest, as he told him he had made the hire on the advice of the president’s son-in-law Jared Kushner and that they had discussed it over lunch.

‘We walked you through every detail of this,’ said Pence, according to an excerpt published by the Wall Street Journal. ‘We did this for you — as a favor. And this is how you respond?

‘You need to get your facts straight.’ 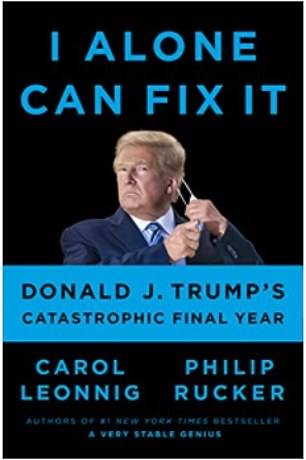 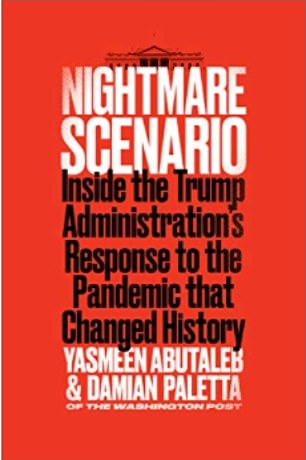 The publishing industry is awash with books about the final months of the Trump administration, revealing behind-the-scenes tensions and rows 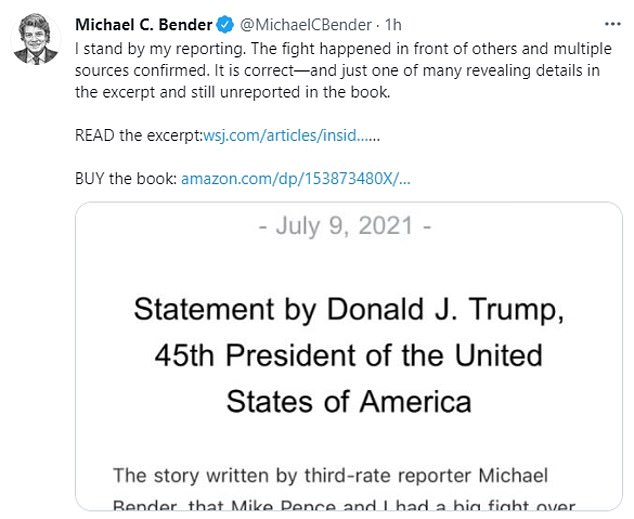 In his book, Bender said he had twice been invited to Mar-a-Lago to interview the former president and on Friday he said he stood by the reporting in his book

In one of two statements issued on Friday, Trump dismissed Bender as a ‘third-rate reporter.’

‘No such fight ever happened, it is fiction as are so many others stories written in the vast number of books coming out about me,’ he said.

But his statement is a reminder that Trump faces a problem in delivering his side of the story: He has yet to sign a book deal.

Reports suggest publishers fear a public backlash and are at a loss to know how to manage an author with a relaxed attitude towards facts.

Meanwhile, the flow of books about him continues.

A account of the White House response to the COVID-19 pandemic – ‘Nightmare Scenario: Inside the Trump Administration’s Response to the Pandemic that Changed History’ – revealed how aides feared Trump might die after becoming ill with the coronavirus, despite officials insisting he only went to hospital out of ‘an abundance of caution.’

And more bombshells are expected when Michael Wolff’s ‘Landslide: The Final Days of the Trump Presidency’ is published next week.

Excerpts have already revealed that Trump considered calling off the 2020 election because of the pandemic and that he mulled a pardon for Ghislaine Maxwell, companion to Jeffrey Epstein, such was his concern about being linked to the financier’s sex scandal.

Then there is ‘I Alone Can Fix It’ by Washington Post reporters Carol Leonnig and Philip Rucker due a week after that.

They will be followed by two-time Pulitzer Prize winner Bob Woodward and Robert Costa of The Washington Post, whose book is expected in the fall. Not to mention those due next year.

Until now, Trump had tried a charm offensive, inviting journalists including Bender to his Florida home at Mar-a-Lago. Aides also offered fact-checking services.

On Friday, he changed tack, dismissing the books as works of invention.

‘These writers are often bad people who write whatever comes to their mind or fits their agenda.

‘It has nothing to do with facts or reality. So when reading the garbage that the Fake News Media puts out, please remember this and take everything with a “grain of salt.”’

For his part, Bender said he had corroborated details of the Trump-Pence bust-up.

‘I stand by my reporting,’ he tweeted in response to Trump’s statement.

‘The fight happened in front of others and multiple sources confirmed.

‘It is correct – and just one of many revealing details in the excerpt and still unreported in the book.’ 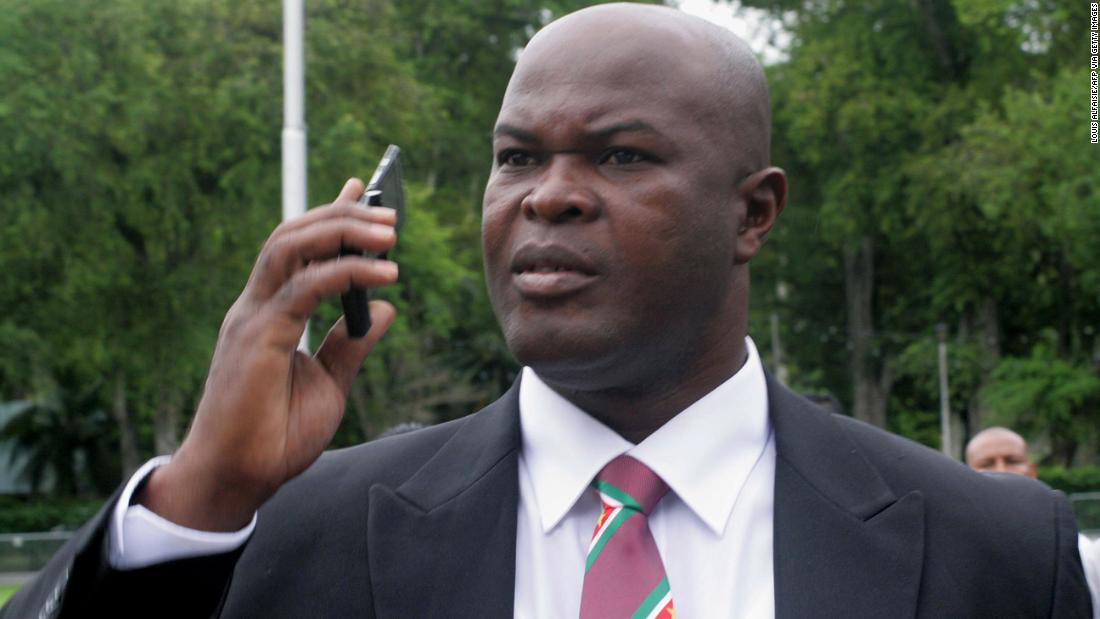 As a community mourns Gabby Petito, more details are revealed about her last days 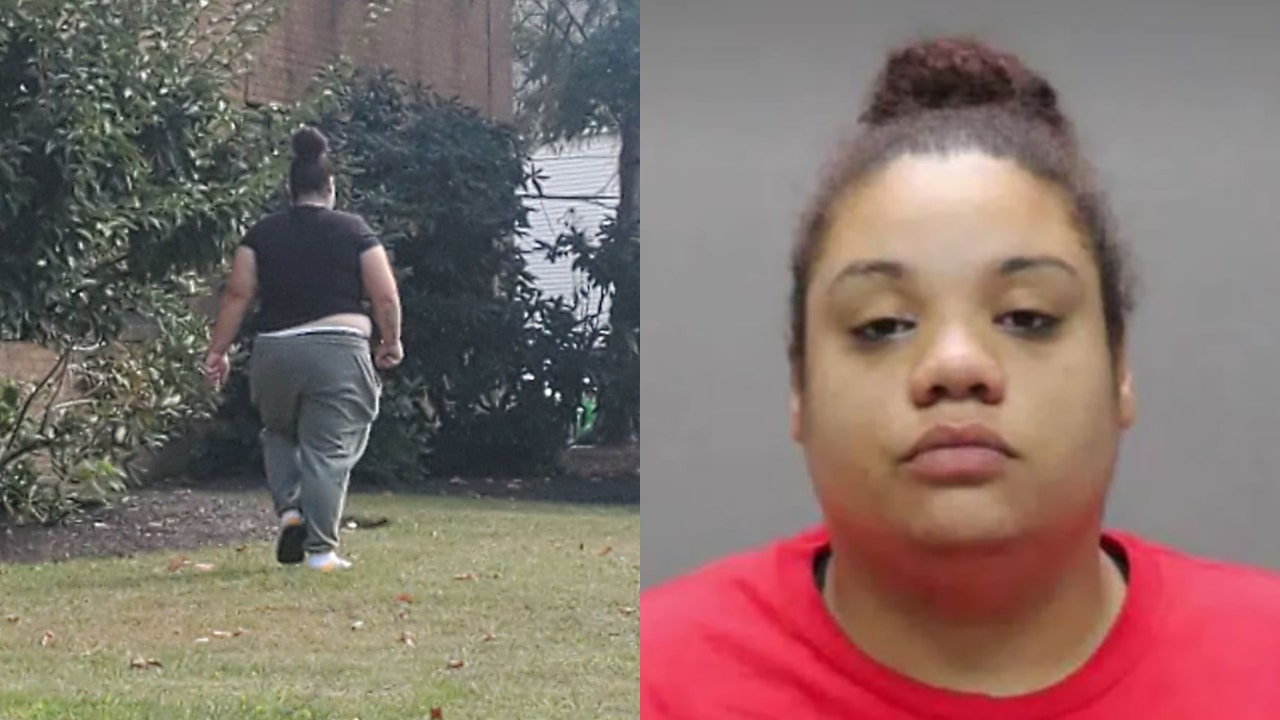 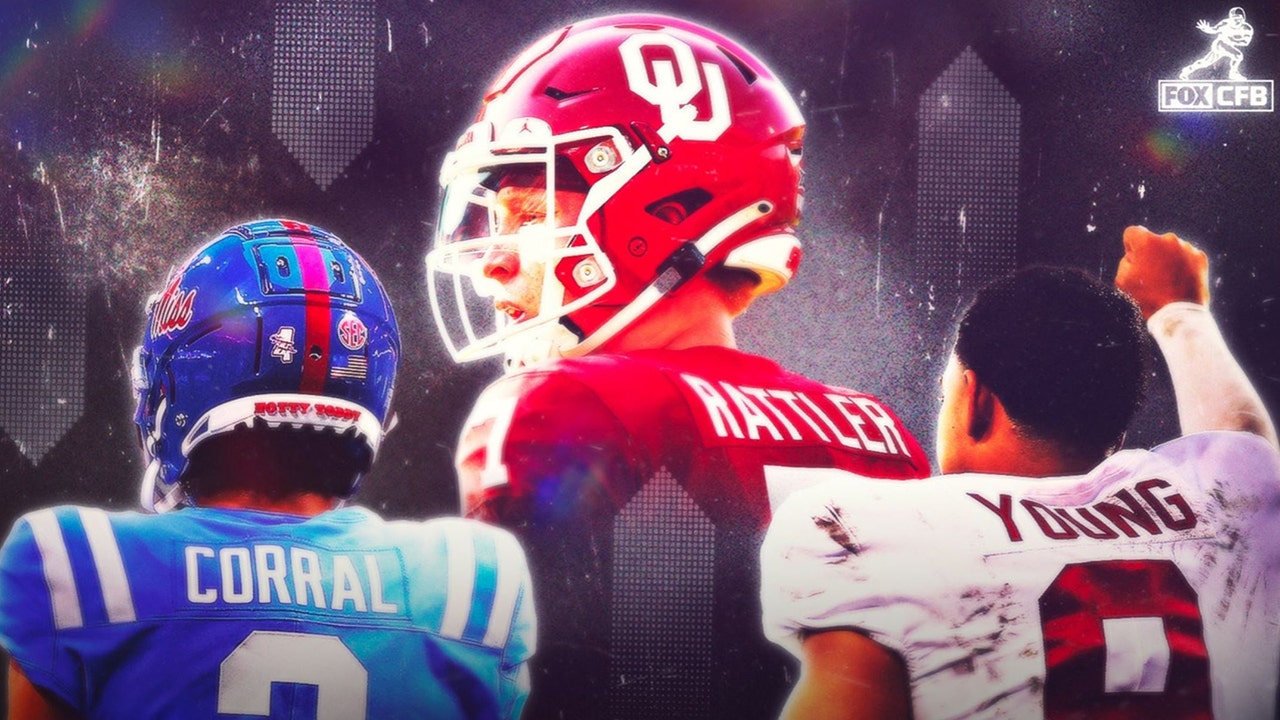 Heisman odds: Matt Corral new favorite to win, but is he best bet?